www.casselsbrock.com      @CasselsBrock
The Vancouver office of Cassels Brock & Blackwell LLP has opened today, Monday, April 16, 2012, at its new premises in the HSBC Building at 885 W. Georgia Street. It is the second location for the Toronto-based law firm. 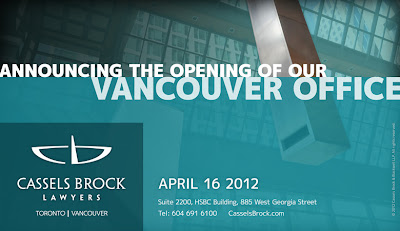 Our decision to establish a permanent presence in the Vancouver market is based on several factors, including the significant size of our existing client and contact base in the area, especially in the mining sector, and the growing number of national and international opportunities we’ve identified that will be facilitated with a western presence,” states Mark Young, the Managing Partner of Cassels Brock. “We’ve considered expansion into other markets before and never saw a true strategic imperative to do so; but now, for us, the timing is right to make this move. Given our position as one of the leading mining law firms in Canada and through our work with an increasing number of Vancouver-based clients over the years, we have gained a lot of familiarity with the City and the Province. We are very excited to be full-time members of the Vancouver community.”
In the early stages of this expansion, the office will be overseen by Jennifer Traub, a partner in the firm’s Securities and Corporate Finance Group and a key member of the firm’s Mining Industry Practice who advises both issuers and investment dealers on financings and mergers and acquisitions.
David Budd, a partner in the firm’s Financial Services Group whose practice focuses on corporate finance matters including secured and unsecured lending and project financing, has also relocated to the Vancouver office as part of the expansion to British Columbia.
The firm has also appointed William A. Rand as Senior Business Advisor for the Vancouver office. Mr. Rand practiced securities law for 25 years in Vancouver before establishing a private company to pursue investment banking and other investment activities and has considerable expertise with emerging public mineral resource exploration companies
at 10:24 PM